Arthritis or inflammatory breakdown of joint cartilage is mostly degenerative. This is inherited and usually sets in after the fourth decade and later. We also see many people with trauma-related joint decay. A neglected fall years before may have torn a ligament resulting in joint instability with cartilage breakdown due to the abnormal joint mechanics of the eight wrist (carpal) bones. There is a well-defined path of degenerative ultimately ending in scapholunate advanced collapse (SLAC). A minority of patients have inflammatory arthritis due to autoimmune disease such as rheumatoid arthritis (RA) or systemic lupus erythematosus (SLE). Gout, a protein breakdown metabolic disease, results from inflammation related to accumulation of monosodium urate crystals. This is rarely encountered in the wrist. There are a few other types of arthritis but they are not germane to this discussion.

People coming to a surgeon want a solution. The nicest thing to be able to offer a person for vague midline, top of the wrist or palmar wrist pain from arthritis is denervation of which the traditional way is to do it open through a tiny incision and remove the posterior interosseous nerve. It is present in everyone's wrist. The person is first checked for feasibility by injecting local anesthetic in the office and seeing if it eliminates most or all of the pain in the wrist by deadening the nerve. If so, the person is a good candidate to get wrist denervation. THe first person to get wrist denervation done percutaneously was inventied by Dr. Ichtertz in about 1989 but because of difficulty in getting equipment and cost issues even though it works well and most of the patients submit to the minor outpatient open wrist denervation wherein about a one centimeter piece of the posterior interosseous nerve is removed under local anesthesia as an outpatient. There is minimal discomfort and no time off work in necessary. Really the only tiny risk there is the small risk of infection present in any operation.

In the event that blocking the posterior interosseous nerve does not give relief or wrist denervation does not give enough pain relief, removal of one or more bones and fusion of the remaining bones in the this limited fusion is an option for some patients and requires an outpatient surgical procedure wherein the twelve bones are anchored to one another with screws and/or a plate and then the wrist is immobilized in a plint for two to three months while the bone heals. In the event that the majority of the wrist is arthritis, wrist denervation is not feasible and the person is too vigorous, i.e. pounds with the wrist and uses it forcefully with power tools, etc., a total wrist fusion is a very good option. This involves connecting all of the bones in the wrist to one another usually with a small metal plate and screws holding it in place and a removable wrist brace is applied until complete bone fusion is achieved on x-ray.

For a person doing office work with partial or limited fusion the person would be able to go back to work within a week; for a person who is doing any kind of physical labor-type job the chances are that they would be off work unless they could be reassigned to lighter durty for about three months. 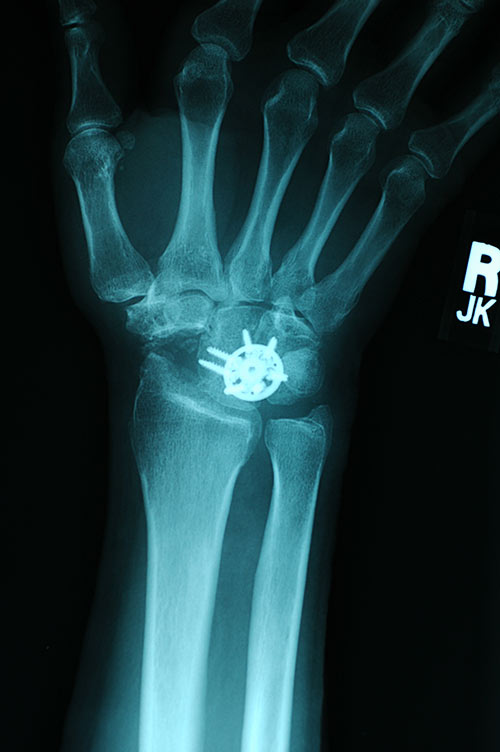 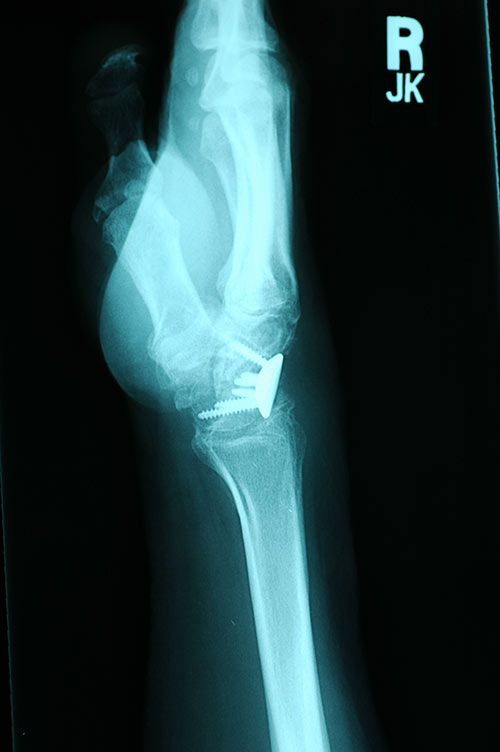 Side view x-ray after

Each of the three nerves crossing the wrist contribute to its innervation. However, Dr. A. Lee Dellon of John Hopkin’s proved most of the innervation that is responsible for carrying or causing wrist pain comes from the posterior interosseous nerve which is easily accessed from the top of the wrist. Testing by injecting local anesthetic adjacent to the nerve in the office will usually tell us if denervation is a good option. Denervation is done as an outpatient under local anesthesia with or without light sedation as desired by the patient. There is really no down time as long as the person can keep the wound clean for about five days because the procedure itself doesn’t hurt. The incision for exposing the nerve is about 1 inch. Dr. Ichtertz has even developed a percutaneous technique using a radiofrequency wand. Failure of posterior interosseous nerve block leaves the choices of proximal row carpectomy (PRC), wrist fusion or wrist replacement.

A very small percentage of patients who have severe degenerative or inflammatory arthritis in the wrist not responding to NSAID may be candidates for total wrist joint replacement.  Most of the patients that fit into this category are in their 70’s and beyond.  It is possible that a younger person could have a total wrist operation but it is only the rare man who is using the wrist in a light enough fashion, i.e. not pounding or doing forceful activity, that would be a candidate.  The problem with wrist joint replacement is that the bone is not bulky like the bones in the hip and the knee and often times a person with arthritis has erosions in their bone to begin with, thus weakening it.  We need to be able to strongly anchor the implants in the bone and be assured that the implants will not shake loose with pounding. 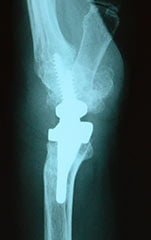 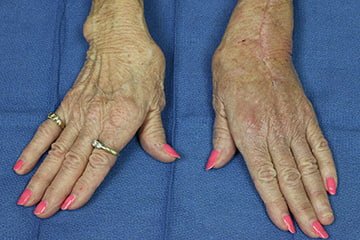 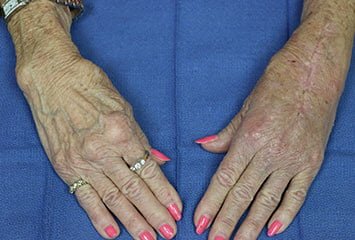 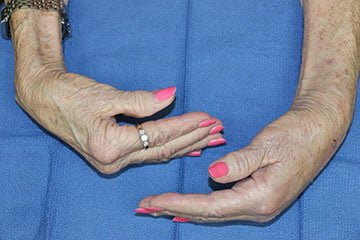 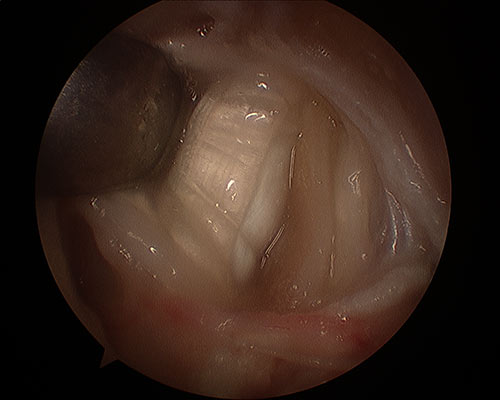 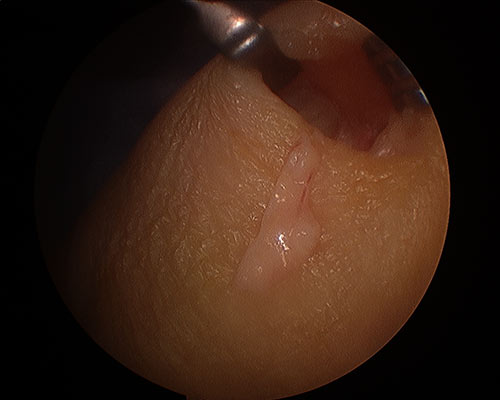 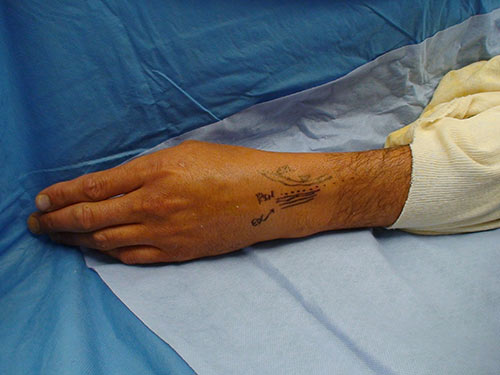 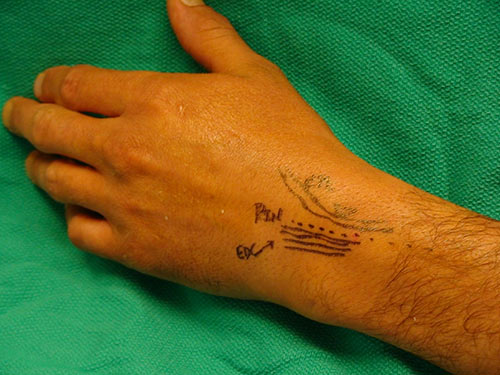 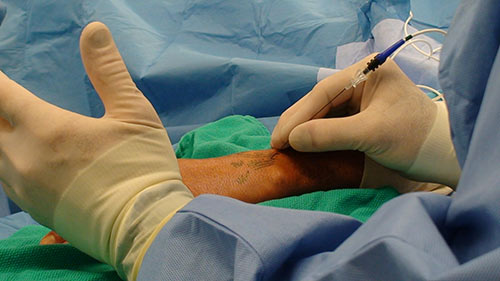